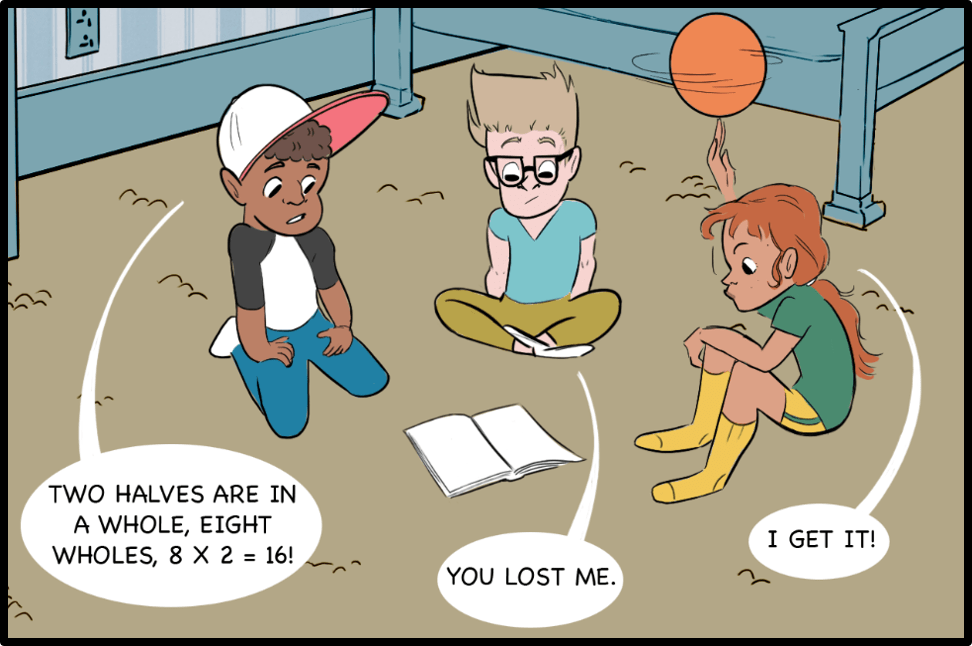 A recent task I developed utilized visual models of multiplication involving a unit fraction.  Can you match the models with the expressions ⅓ x 12, ⅓ of 12 or 12 x ⅓?

Who would have guessed that creating this task would send me on a hunt through time and continents for the first definitions of multiplication, multiplier, and multiplicand?

If you think about what children need to know before they can connect the ideas that 12 divided by 3 is the same as 12 multiplied by ⅓, they need to have flexible models of multiplication in their mental tool box.  So, before introducing why 12 ÷ 3 is the same as 12 x ⅓, I needed a task to check for their understanding of the meaning of a fraction and remind children of whole number multiplication models (or introduce them to children who didn’t have the opportunity to explore the ideas).

The underlying assumption is that one of the expressions ⅓ x 12 or 12 x ⅓ means 12 groups of ⅓ and the other means ⅓ groups of 12.

Of course, I’ve been known to roll my eyes and say, “Does it really matter? The commutative property of multiplication tells us A x B = B x A.  Who cares!” But look closely at the models again. Which one would be the best model to use to explain why 12 ÷ 3 = 12 x ⅓?

A Clash Between Math & Math Teachers?

But if you check the definition on Wolfram Math World it gives us this definition:

Can it be true that the Common Core and mathematicians use different definitions!?!  They both seem to agree that A and B are factors, but they disagree on which variable is the multiplier and which is the multiplicand.  Steven Schwartzman (1994) wrote a book “The Words of Mathematics: An Etymological Dictionary of Mathematics Terms Used in English” published by the Mathematics Association of America, that examined Latin bases of terms.  He defined:

Multiplicand – the number to be multiplied; In A x B, A is the multiplicand

Multiplier – the one that does; In A x B, B is the multiplier because B is doing the multiplying.

I decided to explore the collection of books in my office, which is a mix of advanced mathematics, history of mathematics texts, and textbook designed to teach future teachers mathematics.  The advanced mathematics didn’t provide any insights, but the future teachers texts consistently defined A X B as A groups of B. Then, I stumbled upon the text by Reconceptualizing Mathematics by Judith Sowder, et al. (an excellent book by the way – Mine is the 2010 edition), and she noted that US and British (and countries formerly colonized by the UK) define multiplication, multiplicand and multipliers differently:

A X B means A groups of B

A X B means B groups of A

To me, the first way makes sense, since we want to define A X B as A groups of B as we try to translate the multiplication sign directly into words that empower our children to create models of multiplication. And certainly when we get to algebra, doesn’t it make sense that “3a” means a + a + a?

But why should be use the other definition ?  Interestingly, I found some clues in my history of math texts.  [A couple of fun facts: In 1631, an English algebraist, William Oughtred, was the first to use “X” as a multiplication sign, and one of the co-inventors of calculus, Gottfried Leibniz, was the first to use a dot or “a∙b” to represent multiplication.]  It finally occurred to me that I should consult one of the first mathematicians, Euclid of Alexandria.

Just like in my comic book character Ms. I. D. Vide, I have a copy of Euclid’s Elements in my book collection. Math students usually associate Euclid only with geometry since planar geometry is also known as Euclidean Geometry.  However, Euclid also demonstrated many results about number theory in his famous collection of books, Euclid’s Elements. His work on number theory begins in book number 7, which starts with a list of definitions. “Definition Number 15: Multiplication” was just what I was looking for! The perfect definition from the ancient Greeks!

Fortunately after a little more digging on the issue I found the work of Jonathan Crabtree a mathematician out of Melbourne Australia. He has analyzed many translations of Euclid’s work (e.g English, German, Italian, French), and noted that older English translations are incorrect. Dr. Crabtree argues that Euclid’s definition of multiplication is correctly translated:

ab = a placed together b times

Back to The Task

Bottom line is that both definitions are valid and thanks to the commutative property of multiplication, we can easily translate between the expressions ⅓ x 12 and 12 x ⅓.   So what’s the correct answer to my task? It doesn’t matter! What is important is developing flexible understandings that allow us to move merrily and fluidly between expressions and models.  Now let’s play with the task!

What do you see in each figure below?

This last model allows us to directly connect the concept of division and multiplication because of the great new way we can represent quantities: as fractions! It seems to me that unit fractions are a wonderful way to see the connections between multiplication and division. The models can be translated into English and mathematical expressions in a variety of ways.