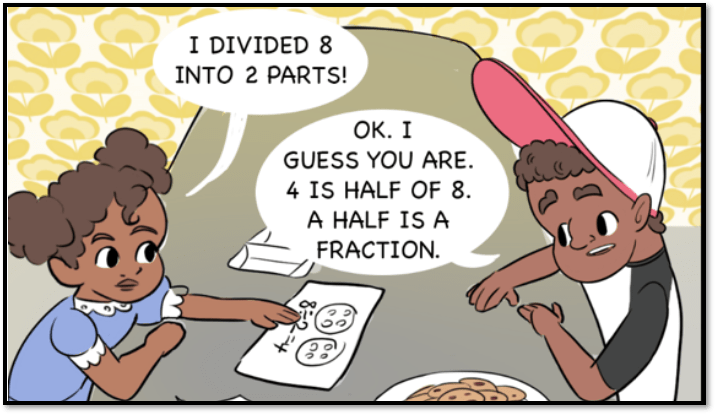 In Newton’s Nemesis, I created Theo’s precocious little sister Leah not only because I was like that to my older sister (yes, I regret that a little bit now) but because I wanted to connect division with whole numbers and fractions.  There is some evidence that the difficulties with fraction division are rooted in understanding division.

That’s why I was interested in the recent work of Pooja Sidney and Martha Alibali, which provided more evidence that teachers may want to activate their students’ knowledge of whole number division before introducing fraction division.  Interestingly, our curriculum in the United States often moves directly from fraction multiplication to fraction division.  But is that the best way to introduce fraction division?

Sidney and Alibali designed a simple but clever experiment to test this. They recruited 62 students who just completed their 5th and 6th grade year and asked them to use fraction towers to model and verbally explain how to add, subtract, multiply and divide.

The scientists chose two types of problems:  half were only whole numbers (e.g. 15 ÷ 5) and half used a whole number and a fraction (6 ÷ ½).  Here’s the clever part. They randomly put the children in two groups and intentionally changed the order of the tasks.

Their study revealed some interesting differences.

They also noted that children who didn’t use the quotitive (measurement) model of division to explain whole number division were not as successful in explaining fraction division.  Part of this may be because curriculum in the United States does not emphasize the partitive (equal sharing model) for teaching fraction division.  I’ll leave the international curricular differences for another posting, but the bottom line is, if equal sharing is the only way a child conceptualizes division, then that may pose challenges when they learn fractions.

Of course, the study has many other interesting insights and I’d encourage you to read it in your spare time (what’s that?).  Some may also critique the study since it only had 62 participants and is therefore not generalizable.  But I’m giving in a “A” for effort just on tenacity.  Each interview took 45 minutes!  That’s 2,790 minutes (over a week!) of video tape to view and analyze.  That’s a lot of work! Kudos to the researchers.