Quotative vs. Quotitive Models of Division 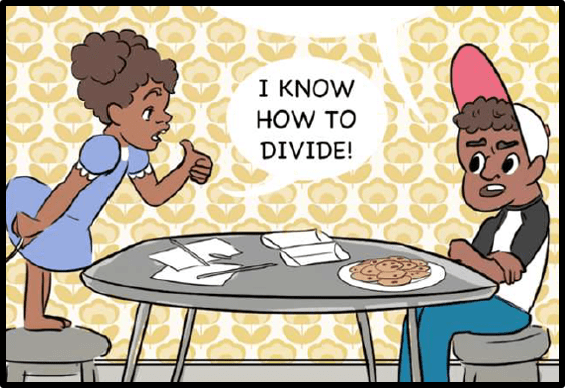 I was telling a math teacher friend about the comic book series I was developing about teaching fraction division, which really was based on how division is understood.  She excitedly asked, “Which model of division are you using?”  I said, “Both!”

If you search for the two models of division on the Internet you’ll quickly find the partitive model and the quotitive model.  But what’s this? A quotative model? I’m sure you’re wondering if I spelled quotitive incorrectly. Certainly, my spell checker is drawing a dramatic red line beneath the word, and many websites spell it as quotative.  If you look up quotitive in most online dictionaries, it doesn’t exist.  According to Merriam-Websters, quotative means, “a function word used in informal contexts to introduce a quotation.” The site also provides the example, [“like” is a quotative in “He was like, ‘Oh, no! not again!'”].

So, like really, what does that have to do with math? Why would quotitive be the correct spelling?  As far as I have read, one of the first times the term quotitive was used to explain division was in a 1985 article by Fischbein and colleagues in the Journal for Research in Mathematics Education. The term is related to finding a quotient or the result of the division problem. Since the quotitive model (a.ka. measurement model or repeated subtraction) repeatedly takes an amount from the quotient.  Therefore, I contend that quotitive is the correct spelling, and will add it to my personal spell checking dictionary.  I’d like to know if anyone else has a good argument for quotative as the correct spelling?  I could be wrong. I provided a better illustrated explanation of both the equal sharing (or partitive) model and the measurement (or quotitive) model in my teacher’s guide, and I’ve copied it below.