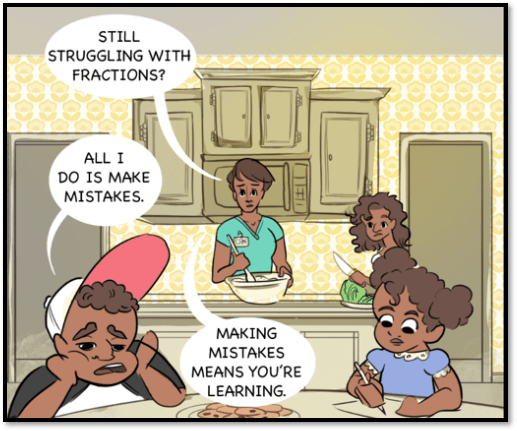 As I developed the story for Newton’s Nemesis, I wanted the underlying narrative to reinforce growth mindset, or more specifically, mathematical mindset.  Jo Boaler, a professor of mathematics education at Stanford University, authored a wonderful book entitled Mathematical Mindset that encourages a culture shift in classrooms that rewards children for exploring mathematics. If children are afraid of making mistakes, then they are less like to want to engage in exploration.  She argues that we need to shift from a culture that equates errors in mathematics with “I’m not good at math” to one that encourages children to, as Ms. Frizzle the cartoon character would say, “Get messy and make mistakes!”

Dr. Boaler devoted an entire chapter on the power of mistakes and struggle, which presents compelling research that children are learning very little when they get every answer correct.  However, when children aren’t hampered by the fear of making mistakes, they are more likely to develop persistence when working on more complex problems. One of my favorite quotes from that chapter provides a beautiful image, “The brain sparks and grows when we make a mistake.”

I needed a character that could explain this science and reinforce growth mindset as Theo struggled, so I created Theo’s scientific mother.

Whether children see her as a doctor, scientist, dentist or nurse, she’s a strong background character that introduces the idea that struggling makes your brain grow. If young readers pass over her comment, they’ll certain see it again in the next few pages.  His mother’s statement, “Scientists have shown that your brain actually grows when you struggle to figure something out,” sets the stage for Theo’s nightmare. Fractions chase him down a dark hallway and cause his head to swell as they launch their attack.

In the teacher’s guide, I’ve added math journaling prompts to provide opportunities for children to engage in metacognition, or reflecting on how they learn.  Below are two examples of math journal prompts that teachers may incorporate into their lessons.

Theo spent a lot of time feeling bad about making mistakes because thinks he’s not learning. Do you make mistakes when you’re learning? Can you describe a mistake you’ve made and what you learned from it? Write a letter to Theo that might encourage him.

Can you think of a time you struggled to learn something, but eventually did? How do you feel when you succeed at solving a hard problem?

But of course I couldn’t resist tying together the underlying narrative of productive struggle with an important fraction concept with this math journal prompt:

As Theo’s brain swells, the fractions ½ and ¼ seem to attack his head.  However, if you take ½ of something or ¼ of something, that just a portion of something.  His head would get smaller if you multiply it by ½ or ¼. What operations might cause his head to grow?

Children might correctly answer that if you add fractions to any number, that would increase the numbers size, and some might make the more subtle connection that dividing by ½ or ¼ would increase a number.  Teachers can leverage this scene to begin a deeper discussion of the effect of multiplying whole numbers by fraction less than or greater than 1, which are concepts often misunderstood by children. At some point children may also make the connection between the inverse operations by posing the following.

If taking ½ of a number is multiplying by ½, that makes the number smaller. Since dividing is the inverse operation of multiplying, will dividing by ½ make the number larger?

Of course, if your students complain that all this thinking is giving them headaches, that’s okay! It’s just their brains growing!