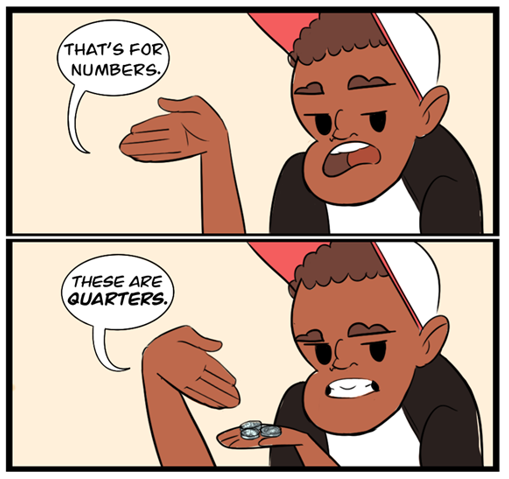 Watching children learn fractions at our summer camp was fascinating, especially when they struggled and overcame number bias. Don’t worry, there is nothing nefarious going on - but it is a real thing that can hamper a student’s understanding of fractions.

During our summer camp, I was following four students very closely as part of a research study, and two of the boys exhibited a classic case of number bias as they tried to determine the size of some unit fractions.  In the fresh morning air, we drew a large chalk number line outside and created index cards with 0, 1, and a collection of fractions on them. When I worked with two rising 5th grade boys, they quickly placed 0 and 1 on either end of the number line and ½ in the middle.  But when it came to ¼ and ⅛, they weren’t sure.  They decided to order the  numbers as 0, ¼, ⅛ , and finally, ½.

~ “One-eighth!” They declared confidently and in unison.

That is natural number bias.  They applied their understanding of natural numbers, eight is greater than four, and applied it to a new number system despite their conceptualization of fractions.  Only one day before, the boys exhibited a clear part-whole understanding of fractions. In other words, they understood that the denominator was the number of equal parts that you needed to divide the whole into and the numerator was the number of parts to count.  But those understandings didn’t compete with their number bias.  They certainly knew that 8 was larger than 4.  That meant the magnitudes of the fractions ¼ and ⅛ should behave the same way!

I needed to leverage their definitions of numerators and denominators to help them discover how to place the fractions.  I asked a series of questions: 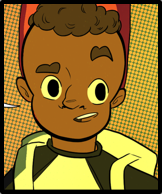 When I asked where the two equal parts were on the chalk number line, they quickly ran to the zero.  They made a huge, dramatic leap from zero to ½, and then jumped another half between ½ and 1.   I laughed and said, “Wow, it’s like you made two giant steps! So, are you telling me the denominator is the number of steps?” By their expressions, they thought I was very slow-witted.  I feigned any knowledge of fractions and then asked about the meaning of ¼.   Without answering, they made four large hops between zero and 1!  They bounced their way along to discover that 2/4 and 4/8 equaled ½, and then 2/8 could equal ¼. It was wonderful - they could bounce off energy and learn fractions!  Their jumps along the number line helped them to overcome their natural number bias and fall back on their part-whole understanding of fractions.

What does research say about Natural Number Bias?

Several studies (Siegler, et al., 2011; Van Hoof’s, et al. 2018) have determined that size (or magnitude) is the first type of natural number bias that children need to overcome.  Interestingly, children are typically able to overcome that bias and accurately determine the size of decimals before the size of fractions.

The next number bias that children resolve is usually associated with operations.  For example, children assume that when multiplying two numbers, the product will always be larger than the factors (e.g. 3x4=12), but that isn’t the case when you multiply by a fraction less than one (e.g. 3 x ⅓ = 1).   That type of number bias is fairly persistent, but doesn’t last as long as concept of density.

If you ask a child how many numbers are between 3 and 5, they will usually respond that 4 is the number, and they may think you are dense for asking!  When children begin to learn the rational number system, they don’t realize that there are an infinite number of numbers between 3 and 5.  In the world of mathematics, we describe rational numbers as dense.  In other words, between any two fractions you can always find another fraction.

Before advancing in mathematics, children must overcome all three number biases, but the first and most important is magnitude.  Siegler and his colleagues tested 6th and 8th graders and found that their understanding of the magnitude of fractions was correlated with their accuracy in fraction operations.  In other words, if children don’t understand the relative size of fractions, they are likely to be less successful in performing multiplication and division with fractions.

After reviewing the research and watching our students learn last summer, the evidence is clear.  No matter what, bias is never a good thing, and we have to work to overcome it.  And finally, size matters, especially for fractions.