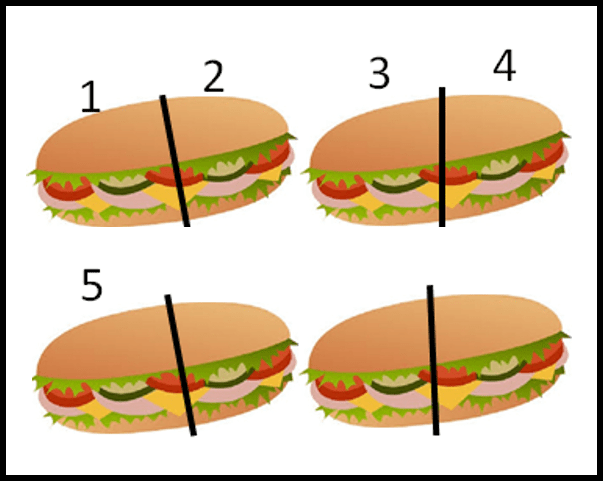 Peck and Matassa (2016) recently published a research paper that reinforced why fraction division and multiplication is such an important topic for children to master. We often hear that understanding fractions is a gateway to learning algebra, and these authors offered some pretty compelling reasons why that’s the case.

Before we get to the study, think quickly about these two problems.  How would you solve them? The first problem:

That’s division: 15 divided by 5 is 3 or three cookies each. How about this second problem:

If 5 people equally share 4 subs, how much does each person eat?

If that made you pause, you’re not alone.  Many might start by cutting up the sandwiches…

Okay, so three people get a half and hopefully two people will be happy with just a half.  Maybe we should divide the rest into quarters…or wait. What if we cut them all into fifths?

Each person gets ⅕ +⅕ +⅕ +⅕ . Then each person can get four ⅕’s.
Peck & Matassa would call this informal modeling of the problem. That’s when you use images related to the context of the problem without using formal mathematical notation.

Notice I arrived at the correct answer, but I didn’t use the idea that the problem was equal sharing division right away.  When it’s whole number, no problem! Equal sharing is division. Divide the two numbers you are given.  But when the answer results in a fraction, hmmmm…that can be a bit of a struggle! I needed sandwiches to help answer the question.

That’s exactly what Peck and Matassa observed in their research study involving 12 high school students in what they described as taking a “support course” for Algebra I. Like many interesting studies, this one was inspired by something they noticed in their classrooms.  Their algebra students reacted differently when trying to solve these two seemingly similar equations:

Their students could solve the first one, but not the second!  Why? The first equation has an integer answer (2), but the second equation results in an “improper” fraction.  The students wouldn’t see 9/7 as an answer.

I’ve seen this exact behavior in my college algebra classrooms.  Students would look quizzically.  Did someone make an error when writing the exam?! Clearly, 7 doesn’t divide 9!  Determined students would resort to long division to find an decimal equivalent, quickly becoming frustrated with an unending number of decimals places.  Others would search quickly for a calculator, thinking, “What idiot would put a fraction as an answer?!?”   Clearly, fractions don’t get any respect! They’re numbers, too!

Peck & Matassa surmised that it was their students’ lack of a depth of understanding of fractions, or more specifically, this idea:

Middle and high school teachers will recognize this problem when they introduce the concept of the slope of a line.  Students learn “rise over run” or “unit rate of change” (in other words, for every one step to the right on the horizontal axis, how far up do you move?).

In the case of nine-sevenths or 9/7 , students should see the rise of 9 over the run of 7 or a 9/7 change for every 1 unit of change. Using real world scenarios, we want out our children to understand the steepness of a ramp that climbs to 9 feet after spanning 7 feet (rise over run), or the growth rate of a seedling that is  nine-sevenths of a foot one week after sprouting (unit rates).  After all, nature doesn’t happen in only in whole numbers!

Peck and Matassa (2016) observed their students struggling and wanted to learn how their students understood fractions and developed a concept of partitive (or equal sharing) division.

They used designed and adapted activities in a setting where students were used to sharing their strategies with a math congress.  One of their activities was the sub-sandwich problem (abbreviated below; attributed to Fosnot 2007)

Peck and Matassa found that students solved the problem with informal constructions (like my sandwiches), preformal models (using bars instead of sandwiches), or formal strategies (straight to the math – no context). Initially, students who could produce “preformal” constructions of the problem were the only ones who could solve it accurately and justify their reasoning.

Students who went straight to fractions (a formal representation divorced from the context) would sometimes guess ⅘ or 5/4 but wouldn’t be able to explain their answer. Those who used preformal not only arrived at the correct answer, but could connect their reasoning.

The researchers observed that students didn’t seem to associate fair sharing with division when it involved a fraction.  In other words, they didn’t immediately jump from, “If 5 people share 4 subs, then each must get ⅘ of a sub.” They might be able to understand equal sharing as partitive division with whole numbers, but not fractions.

Eventually with a sequence of activities and math congresses, students were able to understand fractions as fair sharing.  They also developed activities that moved students from perceiving units of the numerator and denominator as totally separate ideas (people and sandwiches) to conceptualize the units of the answer (sandwiches per person).  This shift is key, not just for mathematical slope, but most science applications.

These intricacies of fractions are beautiful and rich, and it’s not a topic that can simply be taught in elementary school classrooms.  It needs to be layered like a sandwich as we weave in an out of algebraic concepts.  It takes years of stretching our children’s minds as they play with models and build formal understandings before and during algebra.  Yes, children need to understand fractions to learn algebra, but they can also use algebra as a tool to analyze fractions.  That’s the beauty of generalized, formal mathematics!  But which is the meat and which is the meat?

That’s something to ponder over lunch….