Why is Fraction Arithmetic So Hard AND Important! 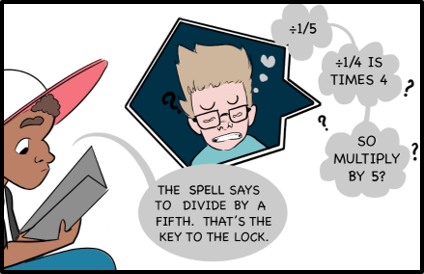 I recently stumbled upon the work of Robert Siegler, a professor of cognitive psychology at Carnegie Mellon University who is working with several colleagues to determine why fraction arithmetic is so difficult.   Of course, all the researchers he’s worked with should also be acknowledged (see below), but this is one of those times you read one article by the an author, enjoyed it, then decided to explore the rest of his work.  I started with Robert Siegler, et al. (2012) then dove down a deep rabbit hole of his great work. And oh, by the way, he has also researched the effect of board games on children’s math knowledge!  So, cool!!  Here are some highlights:

The first study I came across was Robert Siegler, et al. (2012), where the research team looked a data collected about large, but somewhat dated cohorts of children in the United Kingdom and the US.  The same group of children completed math assessments in elementary and high school.  In the UK the 3,677 children were 10-year-olds in 1980; in the US the 599 children were tested in 1997 when they were 10-12 years old.  Their analysis revealed that the knowledge of fractions assessed during approximately the 5th grade was the largest predictor of success in 10th grade mathematics.  Here’s what’s fascinating:  The results held true even when the researchers statistically controlled for prior knowledge of whole number arithmetic, family income and education, race, ethnicity and verbal and non-verbal IQ.  So, no matter what background the child was from or the predicted intelligence (if you believe in IQ scores), fraction knowledge had a significant impact on success in math.

Fraction Division is the Most Difficult – Some Reasons Why

The next year, Siegler & Pyke (2013) published the result of tests given to 120 US children in 6th and 8th grade on fraction arithmetic.  While 8th graders performed better than the younger participants, they answered only 57% of the questions correctly overall, with the greatest success in adding and subtracting fractions.  But, they only correctly answered fraction multiplication problems 48% of the time, and fraction division problems only 20% of the time.  The researchers found that 55% of the errors on fraction division problems stemmed from co-mingling procedures between the different arithmetic operations.  For example, when trying to solve a problem, if a child came upon a step with multiplication that had a common denominator, such as 3/5 x 4/5, he or she would errantly produce 12/5 as the solution.  Braithwaite & Siegler (2018) later termed this as one of those “spurious associations” that our smart little students make.  If they saw common denominators, they predicted the problem must be addition or subtraction. The smart little buggers were trying to predict the operator because, get this, that’s the pattern you see in their text book!

Textbooks – One source of the problem

Siegler and Lortie-Forgues (2017) reported on several suspected causes of these difficulties which included, among other issues, the lack of attention that fraction division receives in text books.  They used a compilation of studies to craft this argument by comparing some of our US textbooks, in particular Everyday Mathematics and Saxon Math, to a Korean textbook (Son & Senk, 2010).  Overall, they found that US texts have much fewer fraction division problems when compared to Korean textbooks, which provide many more opportunities for students to work on division than multiplication. Take a look:

Siegler and Lortie-Forgues (2017) also noted several other possible issues including teacher preparation and reliance on memorization of procedures rather than developing conceptual understanding, which we’ve been working to improve for years!  They also made a strong argument that understanding fraction magnitude (e.g. knowing where they fall on a number line) is strongly associated with success in fraction arithmetic.

And finally, Board Games Rock!

I can’t say it much better than the Washington Post, so here’s a link to his article critique Monopoly’s decision to move from counting money to using bank cards. Seriously?!?!