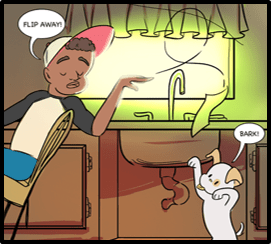 In the new era of the Core Curriculum and reformed mathematics teaching, the big goals are to have our children understand mathematics deeply and solve problems creatively, rather than just memorize a bunch of meaningless steps.  But in our zest to achieve those goals, professional math educators sometimes give the impression that algorithms are enemies that should be banished from classrooms.  In my opinion, nothing could be further from the truth.

I just finished reading an article by Lianghuo Fan and Christian Bokhove (2014) that provided an excellent literature review and argument that there is a role for algorithms in the mathematics classroom.   But, as they noted, there is a negative perception of algorithms. Fan and Bokhove cited several studies that promoted this perception, including the TIMSS 1999 Video Study that described poor math lessons as “very algorithmic” and “rule-oriented”.  Even Canada’s curriculum framework excludes the standard algorithms for the four basic arithmetic operations.

Personally, I think they’re fighting an uphill battle when it comes to fraction division.  Any parent trying to help their children with how to divide by fractions will certainly go to the internet and find the following:

Even our public broadcasting system has jumped on board the Keep-Change-Flip algorithm . Of course the video reminds me of the old School House Rocks videos (that’s how I learned about conjunctions, memorized the preamble to the constitution, and more).

Rethinking the Role of Algorithms

Algorithms are useful and efficient tools. They aren’t inherently bad. But if we’re not careful in how and when we introduce them in the classroom, we risk having our children miss out on developing rich understandings of mathematics. According to Fan and Bokhove, we need to consider the teaching of algorithms in the context of Bloom’s taxonomy (including updated versions of Bloom’s work).

If you were learning at the lowest cognitive level, you would just remember an algorithm because the teacher showed the steps or you read it in a book.  At cognitive levels that are just a little higher, you could understand why an algorithm works and how it could be used.  Teaching algorithms at such a level requires a teacher to explain why it works, provide a logical derivation or proof, and make connections with students’ prior knowledge.  But at the highest levels, you can construct your own algorithm and evaluate alternative algorithms.  Clearly, teaching at the highest cognitive level requires allowing students to explore and create their own algorithms.

Any topic can be taught at low levels (memorizing the constitutional amendments) or higher levels (applying the first amendment to case law). In the same way, mathematical algorithms can be taught at many different cognitive levels.  We don’t have to begin at the basic level (e.g., drill and kill, imitate what I do, etc). We can let children explore and create their own algorithms, evaluate whether or not their strategy will work every time, and also, allow them to discover the beauty and efficiency of the standard algorithms (if they didn’t event those algorithms themselves)!

The key is to get children to understand why you “invert and multiply” and discover the reason “Keep, Change, Flip” works.  If they can explain it, then they won’t have to memorize it! So maybe algorithms aren’t the arch enemy of mathematics.

Algorithms are Our Frenemies – While they might be our friends, they are often our rivals when we’re trying to teach mathematics conceptually.